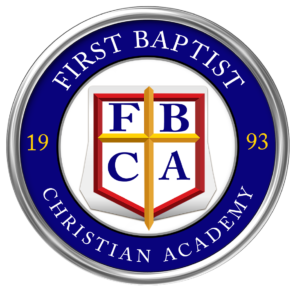 The college admissions process is a moving target. At one time every school gave a number rank to high school graduating seniors. This proved a deterrent to qualified students from small schools populated by high performing students. The trend (FBCA included) moved toward not ranking at all. College admissions offices changed the game by offering automatic admission to students in the top 10%. High schools (FBCA included) then began ranking only this percentile. Again, colleges responded. Currently admission standards are based on a combination of quartile ranking and associated exam (SAT or ACT) scores. Students who do not have a rank are automatically placed into the “individual review” category. In order to advantage more FBCA students in the admissions process, FBCA will as of January 1, 2019 provide the following ranks:

Only students graduating from FBCA with a minimum of three years enrollment are eligible for consideration as Valedictorian, Salutatorian or top 10%. Further ranking for purposes of college admission (top 25% or 50%) is made for students enrolled at FBCA for a minimum of four semesters.

FBCA calculates grades on both an un-weighted 5-point scale as required for some college admissions and on a weighted 5-point scale to reflect the difficulty of courses taken. Courses for which a weighted scale will apply will be listed in the Secondary Handbook and communicated to parents and students at the time of course selection. The weighted scale will be used for purposes of Honor Roll, selection of Valedictorian and Salutatorian, and top 10% quartile or half ranking.

Class rank is determined based on courses taken within the normal seven period day (28 credits), but shall not include:

For an initial credit course taken via correspondence, online, or summer school the student must secure permission from the principal before enrolling. Determination as to whether the grade will be considered for ranking purposes will be made at the time permission for enrollment is granted. When a student takes a course in summer school for remedial credit both the original grade and the summer school grade will be reflected on the transcript and factored in rank. In cases where a student receives credit by exam for a language other than English, the student may not secure an advantage over other students by increasing the number of weighted points (AP or Dual Credit) available to that student when compared to other students. In cases where such an advantage exists, the weighted points will be counted in the GPA for the transcript, but not for ranking.

Courses taken during junior high for high school credit shall count toward graduation credit but shall not be used in calculating class rank or GPA. Students who transfer to FBCA having taken honors courses at another school will be credited with the weighted GPA for purposes of their transcript; however, unless students at FBCA had a similar opportunity to take the course at that level the weighted points will not be counted in determination of class rank. Students who take dual credit courses will be awarded the weighted point GPA for their transcript; however, not all classes are subject to weighted points for ranking. See dual credit courses in this handbook for a list of courses for which points apply. Should a question arise, a student should seek clarity from the secondary principal before enrolling in the course.